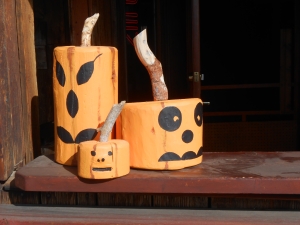 On a fall road trip, I spent a couple days traveling through Wyoming. In a little (as in very little) town call Centennial, these jack-o-lanterns were on the porch outside a delightful western restaurant (“The Post Restaurant & Saloon”) where I had dinner the night I arrived and breakfast the next morning. (I stayed at The Old Corral Hotel and Steakhouse–charming, cozy, and very cowboy lodging. I’m looking forward to spending more time there!)

The winter of 1955-56 I was 6. We lived in a cinder block house on a hill just outside of Cheyenne, not far from the refinery with its distinctive smell and storage tanks painted in a variety of pastels. According to my Dad, they had been painted that way so they would look like houses to anyone looking down at them from an airplane. I couldn’t figure out how anyone could mistake the round shape of the tanks for a square house, but what really puzzled me was why people in airplanes had to fooled.

That winter I had a royal blue wool coat. It had a peter-pan collar and a double row of blue buttons, but it was its’ chameleon-like ability to change color in the backseat of the car at night that I loved. I was fascinated by the way it turned a pinkish purple as we passed under the highway lights. Watching my coat glow brighter as we got closer to a light, then fade back to its normal color as we moved into the dark space between the lights was like a kind of magic. Glow and fade, glow and fade, glow and fade, as we drove to or from Aunt Sue’s, or Grandma T’s, or the weekly pinochle game at Jean and Don’s, or back from Denver. With Dad driving while my sister nodded off behind him on the other side of the backseat, and my two-year-old brother snuggled on Mom’s lap, I watched my coat.

Wyoming is famous for wind and tumbleweeds. Wind not only blows tumbleweeds around, but piles the snow in huge, and sometimes inconvenient drifts. One winter morning in the cinder block house, we woke to discover the wind had blown a large triangle-shaped drift against the front door. In the morning sun, the snow looked like it had been sprinkled with glitter, uncountable specks of the rainbow glistening and shimmering as Dad shoveled. Somewhere there’s a photograph of Dad standing on the little cement porch after shoveling us out, the six foot piles of snow on either side of his 5’11” height making it look like he was standing at the end of a short tunnel.

That Christmas Mom included a large, very round tumbleweed in our holiday decor. After spraying it with fake snow, she hung a colorful variety of little round ornaments all over it, then placed it in the center of our blue Formica and chrome table. I thought it was funny to have a tumbleweed Christmas decoration, but when the curtain was open and the ornaments reflected the sunlight, I also thought it was beautiful.

We had a little blue parakeet named Bo. Bo had a newspaper lined cage where he spent mealtimes and slept at night, but at other times during the day Mom liked to let him fly around. She kept some of his wing feathers clipped so he couldn’t fly too far, but she thought it was mean to keep him caged, and “behind bars” all day. She especially liked to have him perch on her shoulder, where he would sometimes peck at an earring, her glasses, or a blonde curl while she was washing dishes, cooking, ironing, or other housework. Other times, she would teach him words or short phrases, repeating things like “pretty boy”, “hello”, and “wanna drink”, over and over.

A few days before Christmas, Bo discovered the tumbleweed and all its shiny ornaments. By the time Mom saw him pecking at the tumbleweed, shaking the fragile little green, red, gold, silver, and blue balls so hard one of them shattered on the table, it was too late. He had also swallowed some of the tumbleweed. Whether he was injured from some sharp barb catching in his throat, or poisoned from the fake snow, we never knew. He died the next day.

I don’t remember anything else about that Christmas. I’m sure Santa came, and I  imagine we went to Grandma Ts for dinner, and that I watched my blue coat change colors as we drove to and from her house.